Next Stop: Overnight Train to Berlin

As many of my readers know, my husband and I go to Cuba every year for anywhere from 8 to 11 weeks. (Click the Cuba tag on the right hand side to pull up those travel blogs if you’re interested). One of the joys in going to the same place every year is meeting fellow tourists who also return year after year. It’s akin to a family reunion most of the time we’re there, as different tourists from all over the world return at different times during our stay.  Over the 12+ years that we’ve been going, we’ve become good friends with some of those other tourists, including Kerstin and her daughter Janine from Berlin, Germany.

Every year for the past few years, Kerstin has been asking us when we were going to come and visit them in Germany. Finally this year we took her up on her invitation. André had been stationed in Germany for four years while he was in the military, but hadn’t been allowed to visit Berlin at that time, so it had always been on his list of places he wanted to see. So he was especially excited when we finally left Paris and were headed to Berlin.

We had decided to take the night-train from Paris to Berlin. It was 13 hours, which for me had caused some anxiety, given that I suffer from fairly severe motion sickness. But to my delight, all it took was a little Gravol and I had no problems whatsoever. The train ride was quite rough throughout the France portion, but once we crossed into Berlin, the difference was pleasantly noticeable and we were actually able to sleep for a few hours.

The compartment was very tiny. I took pictures, just in case anybody who stumbles on this blog wants to see first-hand just how small these sleeping rooms are. They’re ingeniously laid-out though, and would have been comfortable enough if we had been able to check our baggage rather than have to stow it alongside the bottom bunk.

Here are those few pictures from the train. This is just a “stop-gap” blog while I put together part 1 of the Berlin series…I have lots of pictures and things to research in order to provide more information, so it might take a couple of days. So in the meantime, come and have a peek at our teeny tiny room on the overnight train to Berlin. 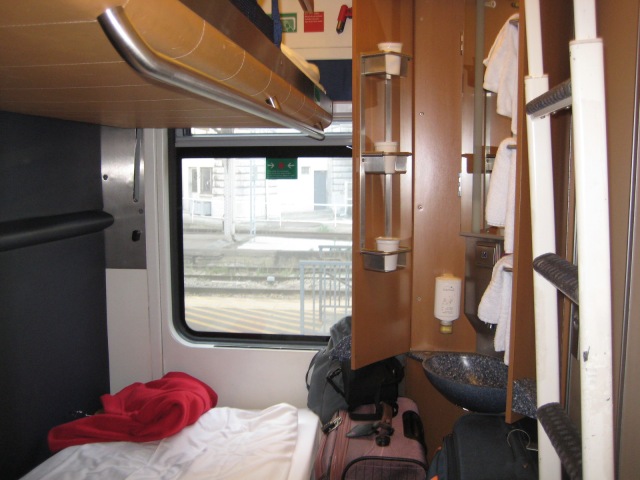 This is our sleeping compartment. There are three bunks in this room, but we didn’t need the uppermost one so it was not made up. This picture is taken from the door. The unit in the right-hand corner is a sink.

A better picture of the upper bunk 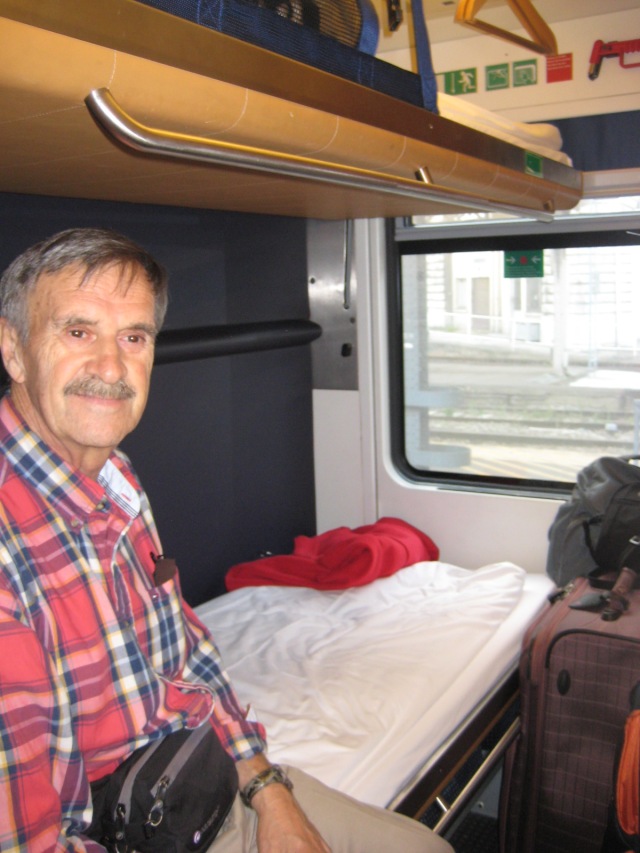 André inspecting all the gadgets and buttons that were all over the walls. 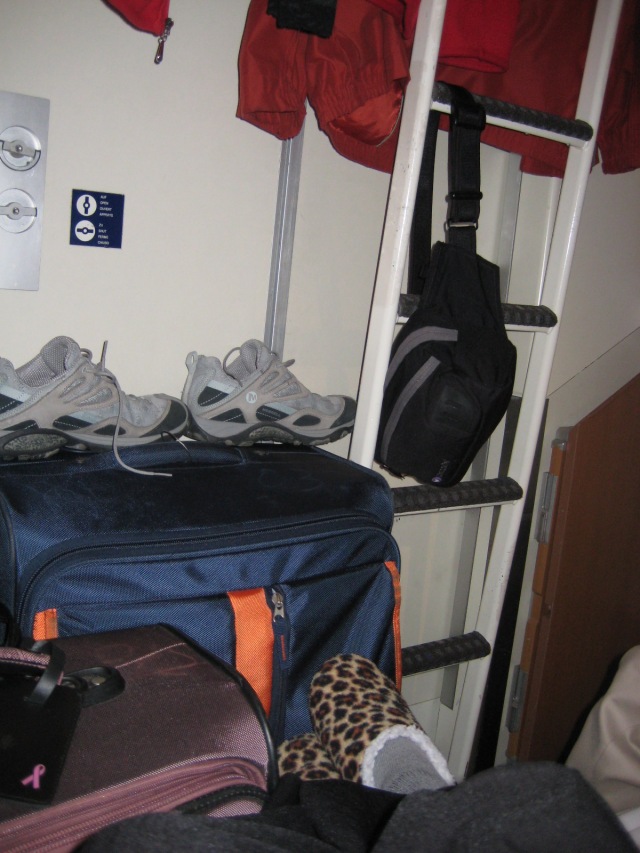 At least the luggage served as a useful shelf! The brown slab on the bottom far right is the table which hooked up to notches located behind the suitcase, so we had to move everything around in order to eat. Well, I didn’t want crumbs on my bed, did I! 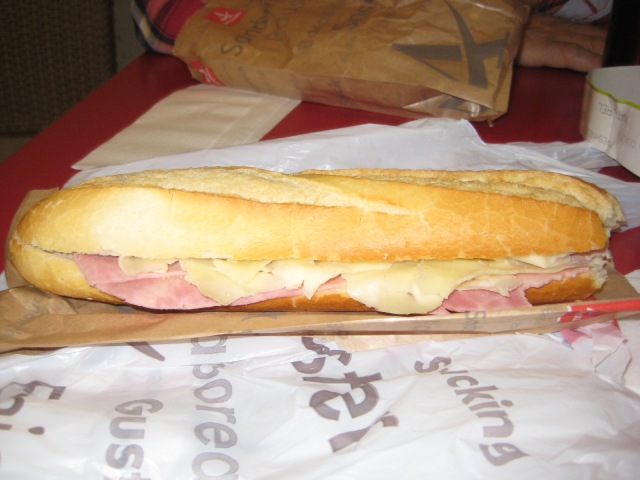 The yummy French baguette sandwiches (made with mouth-watering fresh bread) that we bought at the train station in Paris before catching the train. There was no dining car on this overnight train (which we found very strange), but once we were on board we learned that we could have ordered food, though probably not as good as these baguettes turned out to be! 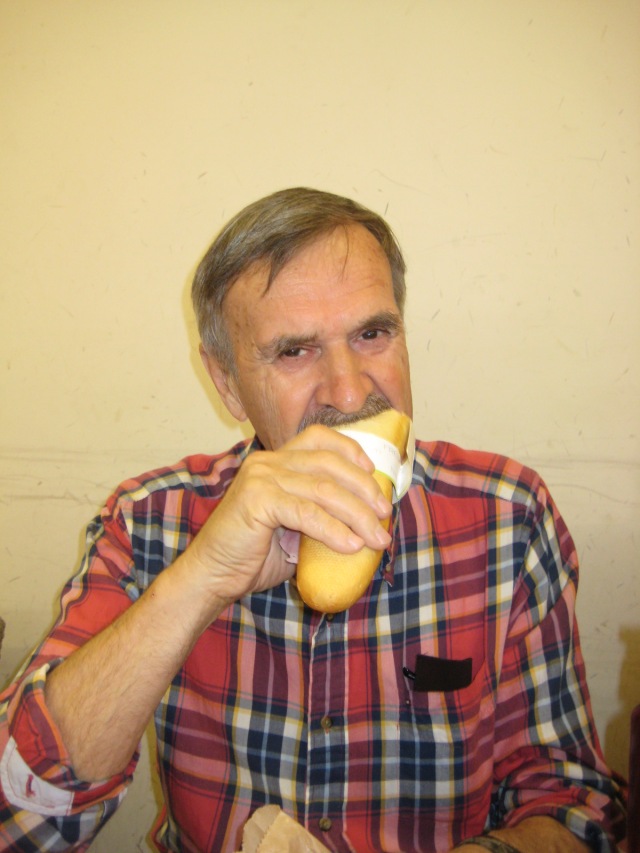 André enjoying his baguette supper on the overnight train to Berlin. 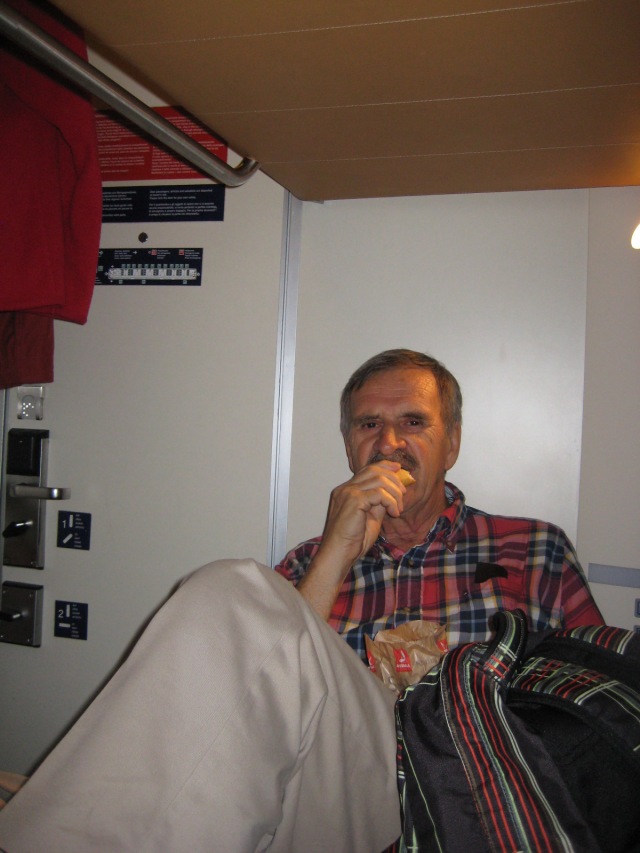 I love to write. I love to write myself into being right here right now. Writing releases something in me that needs wings, writing opens doors and windows that I often don't even realize are possible, writing helps me breathe out the dusty old, and to breathe in the new and possible. My hope is that maybe writing here in this blog will bring new light into these dusty old hallways and help me to clear out the thinking processes and mindsets that just don't work for me anymore. I seek to breathe new light and life into the nooks and crannies of a soul that has been feeling somewhat lost and frayed because of the last few patches of road I've had to travel.
View all posts by Sharon →
This entry was posted in Berlin, Paris, Travel and tagged Berlin, Overnight Train, Paris, travel. Bookmark the permalink.

5 Responses to Next Stop: Overnight Train to Berlin