Being in Mahdia for three weeks gave us plenty of time and opportunity to visit other parts of the region…we had been told that Sousse would be a great outing…but we were so charmed by Mahdia and never tired of our daily walks through different areas of Mahdia, so we felt no desire to go anywhere else…except El Jem (which is the tourist-friendly name – the actual name of the town is El DJem). Being a huge history buff, Andre was particularly interested in visiting El DJem, home to what was being touted in all of the brochures as the most impressive Roman ruins in Africa, rivalling even the Colosseum in Rome. We had been to the Colosseum in Rome and had thoroughly enjoyed our visit there, so El DJem appealed to both of us.

We took the Louage taxi from Mahdia to El DJem, which was a comfortable and interesting 45 minute drive through olive groves, cabbage patches and small villages all along the way. The Louage took us to the El DJem Louage station, which was only a few blocks away from the Amphitheatre. At the top of the Amphitheatre’s outer stairs leading down to the pay kiosk, I spotted my first camels of the trip, and promptly took a picture. A man came running out of nowhere, insisting I pay him a Dinar for having taken the photo, but I quickly escaped down the stairs to the Amphitheatre entrance.

Once through the turnstile, we were thrown back in time as we entered the Amphitheatre. It was still fairly early in the morning and we had the entire place to ourselves for quite awhile. It was breathtakingly beautiful! We wondered upward through all five levels of the upper ruins…well, I only managed four levels, the fifth level stairs were too precarious and steep for me, so I stayed behind and soaked it all in. (And while I was soaking it all in, I realized that the many small openings in the outer walls allowed me to easily take better, and free, photos of the camels down below in the town square.)

Once the guys had thoroughly explored the upper levels, we found stairs that took us  down into the amazing and well-preserved underground where we were able to see where the gladiators and lions (and other animals) would have been kept. It was interesting to see that most of the underground chambers were high enough to allow horses and chariots to drive through unimpeded.

All in all, it was a fascinating journey back in time to the grandeur – and brutality – of the 3rd Century Roman empire; I could envision the blood and gore of the battles that had once been fought within these walls, and could almost hear the shouts of the tens of thousands of spectators who would have sat in those very seats we were standing on.  It was both exquisite and sobering.

We enjoyed our freedom to roam pretty much everywhere and anywhere we wanted within the ruins, giving us plenty of time to absorb each new view and explore so many of the little nooks and crannies of the intricate structures. After exploring for 2-3 hours, we decided to search for a place to eat, eventually walking several blocks to one restaurant recommended by a few of the shopkeepers. We ordered the chicken special, which came with very generous portions of appetizers, including delicious mini olives, salad and the chicken itself, which was barbecued on a special grill set up outside of the restaurant. The meal was delicious, plentiful, inexpensive and filling.

We walked back by a different route, which took us around the back of the Amphitheatre (and through one particularly precariously narrow street with no sidewalk), eventually  arriving once again in front of the Amphitheatre where the camels still sat. I found the camel’s owner (or at least the guy who had asked me for a Dinar earlier) and I gave him five Dinar…he looked surprised and quizzical and asked “why?!”, and I told him it was because I had taken FIVE pictures of his camels from inside of the ruins. Well he laughed so hard, and we shook hands and he left with a big happy smile on his face. I did too.

We made our way through another narrow street, which seemed to be the jean capital of El DJem…several long stretches on both sides of the street were lined with jeans of so many different styles…bling, holes, whitewash, blue, black, blue and black, checkered, leather inserts, short, long, overalls, mens, women’s, children’s…I should have taken pictures. Next time. (though if you Google “Jeans for sale in El DJem Tunisia” (or click here), you actually can see lots of pictures of jeans from El DJem!) Anyway, we managed to make our way safely (by that I mean we didn’t buy any, though some did catch my eye) through the jeans and back to the Louage station and then back to Mahdia just in time for a late afternoon siesta before supper. It was one of the nicest days we’ve ever had.

El DJem is another “must-see” if you’re ever in the neighbourhood. Here are some pictures from our day in El DJem.  As you can see, there were much fewer people-constraints here, so I took LOTS of pictures. Click the pictures to see larger versions.

I love the colours in this market!

We had a lively conversation with this young man, who begged me to take his picture.

My first camel siting in Tunisia. 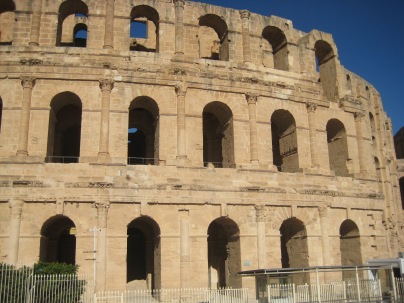 Andre and our friend Wayne 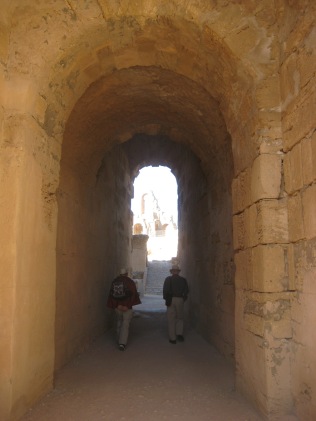 Which way did he go?! 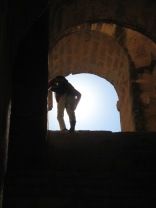 Last/fifth flight – I couldn’t go up these ones!

This pigeon spooked me! 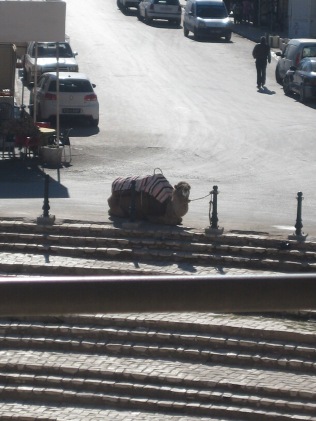 Perfect view of the camel. 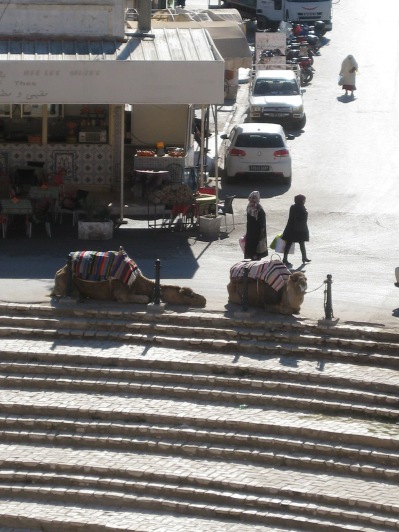 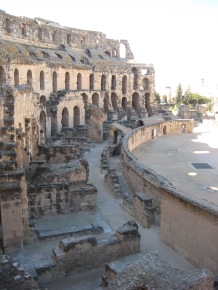 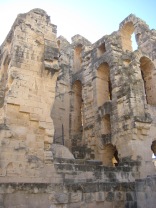 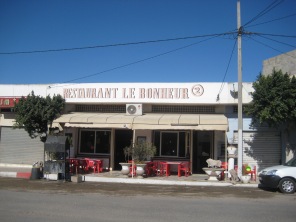 The mini-olives were so good and I don’t even like olives!

Chicken on the BBQ…there was a cat somewhere nearby but camera-shy. 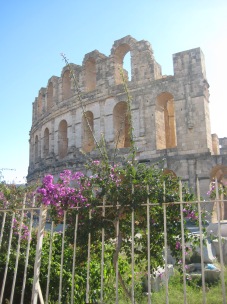 In the next segment, we’ll see a lot more pictures from Mahdia itself, a compilation of photos taken during our many walks through the city over the three weeks we were there.

I love to write. I love to write myself into being right here right now. Writing releases something in me that needs wings, writing opens doors and windows that I often don't even realize are possible, writing helps me breathe out the dusty old, and to breathe in the new and possible. My hope is that maybe writing here in this blog will bring new light into these dusty old hallways and help me to clear out the thinking processes and mindsets that just don't work for me anymore. I seek to breathe new light and life into the nooks and crannies of a soul that has been feeling somewhat lost and frayed because of the last few patches of road I've had to travel.
View all posts by Sharon →
This entry was posted in Travel and tagged Africa, El DJem, El Jem, Mahdia, Northern Africa, travel. Bookmark the permalink.