It’s hard to believe that we’re just starting out on our 4th day in Berlin! By Monday, we had seen so much more than we had ever expected to see! And yet here we were, on the road to Potsdam for another amazing day of sight-seeing in the largest World Heritage Site in Germany.

Potsdam was home to Prussian kings and German Kaisers until 1918 and was now the capital city of the German federal state of Brandenburg. For us, Potsdam was a fascinating panorama of beautiful parks, bridges, eclectic architecture, three public colleges, a major film production studio as well as the magnificent palaces of Sanssouci.

When we arrived, we discovered that the museums in Potsdam were closed, so after roaming around the grounds of Sanssouci Palace for awhile, we opted for a 1-3/4 hour double-decker tour bus which took us through the entire city of Potsdam. Now, the bus promised tours in several languages, via pre-recorded commentary via headphones. André found this system very helpful and was able to hear a wealth of useful information in French. When the tour began and I put on my headphones to listen to the English channel, the commentary had already begun and was already talking about sites that we hadn’t even reached yet, leaving me quite lost and frustrated. The guide was quick to switch her live commentary from only German to both English and German, which was kind and helpful of her, but I have to admit to being lost for most of the tour.

I didn’t really mind, I was quite happy snapping away with my camera. The only problem with that is that I have no idea what a few of these buildings are, so could not caption them correctly.

After the bus tour, we drove into the Dutch quarter of Potsdam to find a bite to eat and explored the Brandenburger Street area on foot. Then we headed back toward home, stopping en route to finally enjoy the “famous donairs” that Kerstin and Janine had been promising us for days. I still can’t believe I didn’t take a picture of our donairs!!! Maybe because they were so messy and took two hands to eat. And maybe because they were too delicious to put down for the few moments it would have taken me to get my camera out. For whatever reason, I didn’t get a picture of the donairs. However, I did find a picture on another site  and am including it here, to give you a taste of this amazing sandwich!

But I took a lot of other pictures! Some are a bit blurry, because the bus was moving too fast to focus well. But I hope you enjoy our day at Potsdam as much as we did. 🙂

The South (Garden) facade of Sanssouci Palace in Potsdam, Germany

One of several garden houses on the grounds of the Sanssouci Palace in Potsdam, Germany 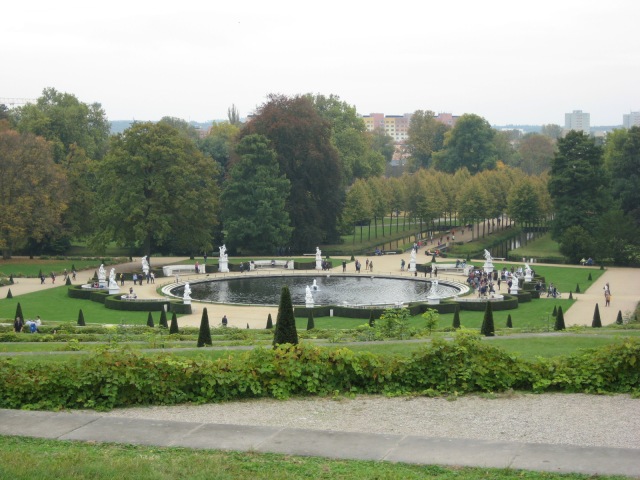 The terrace gardens of the Sanssouci Palace in Potsdam, Germany 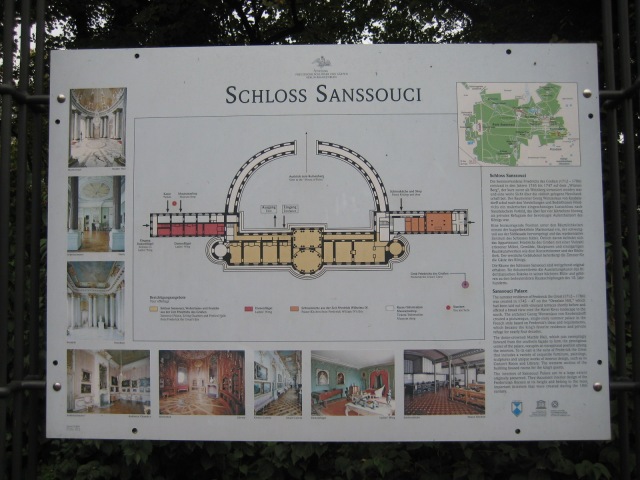 Information plaque for the Sanssouci Palace in Potsdam, Germany 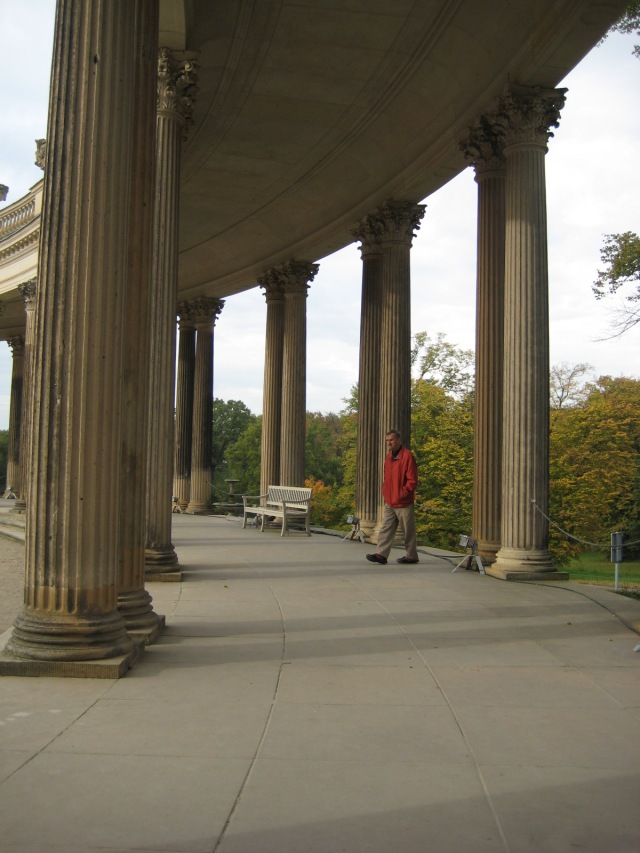 André exploring the colonnades in front of the Sanssouci Palace in Potsdam, Germany

André in front of the colonnades of the Sanssouci Palace in Potsdam, Germany

Our double-decker tour bus in Potsdam

Luisenplatz Square with the Brandenburger Tor (gate) in Potsdam 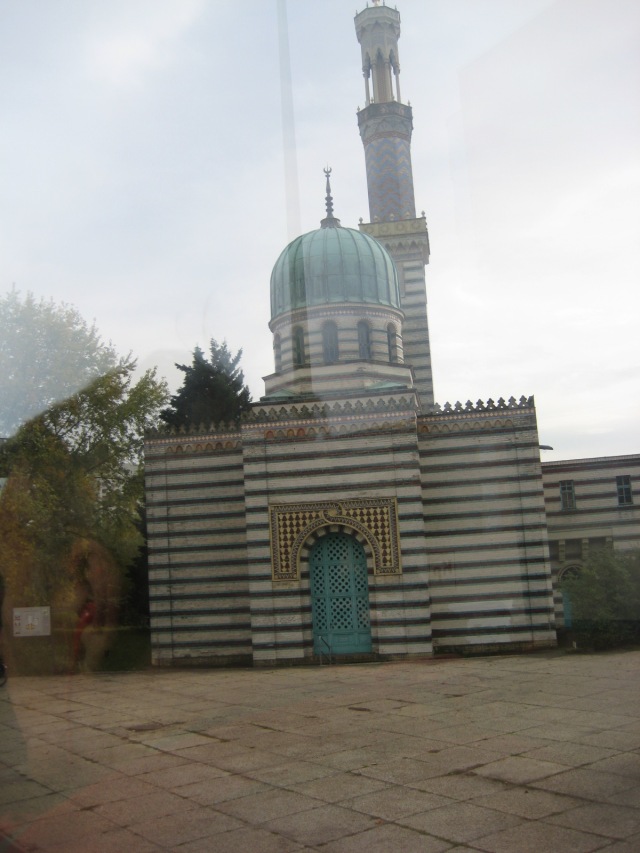 Around 1841 Frederick William IV had this beautiful mosque erected at the “Neustädter Havelbucht” in the centre of Potsdam, with its minaret built to be visible from the terrace of Sanssouci Palace. Howver, although it looks like a mosque, it was actually built to disguise the steam engine that is housed inside.

The dome of the Nikolaikirche (Nikolai Protestant Church) in Potsdam

There was even a ferris wheel in Potsdam!

This is the Film Museum in Potsdam 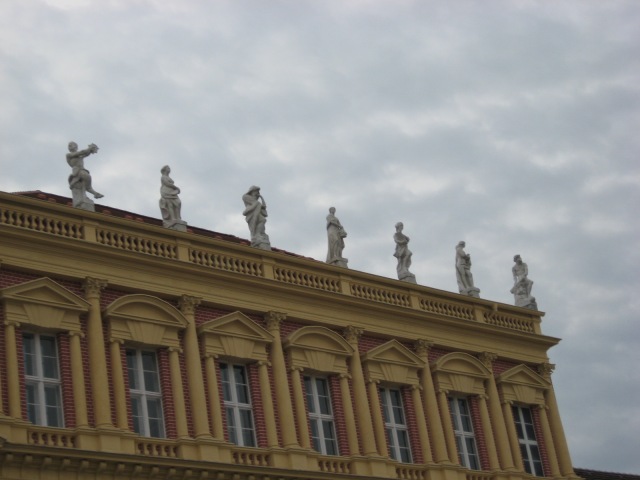 I think this is part of Neues Palais, Potsdam 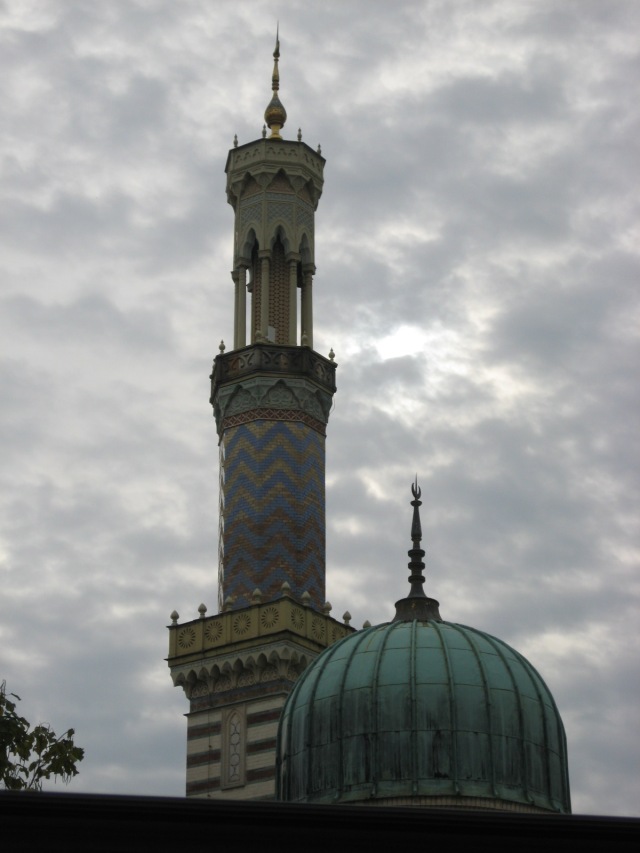 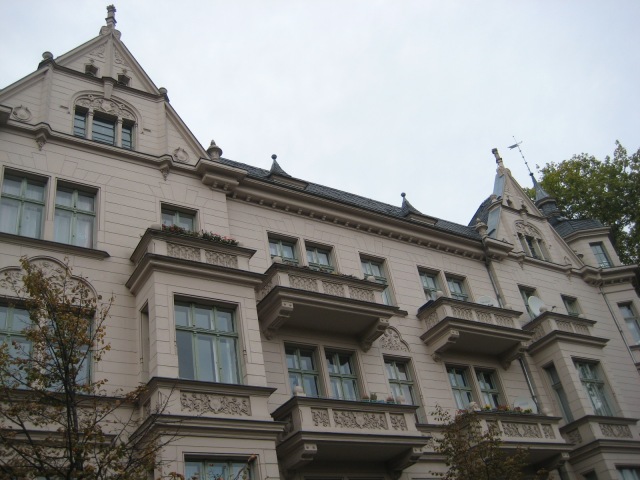 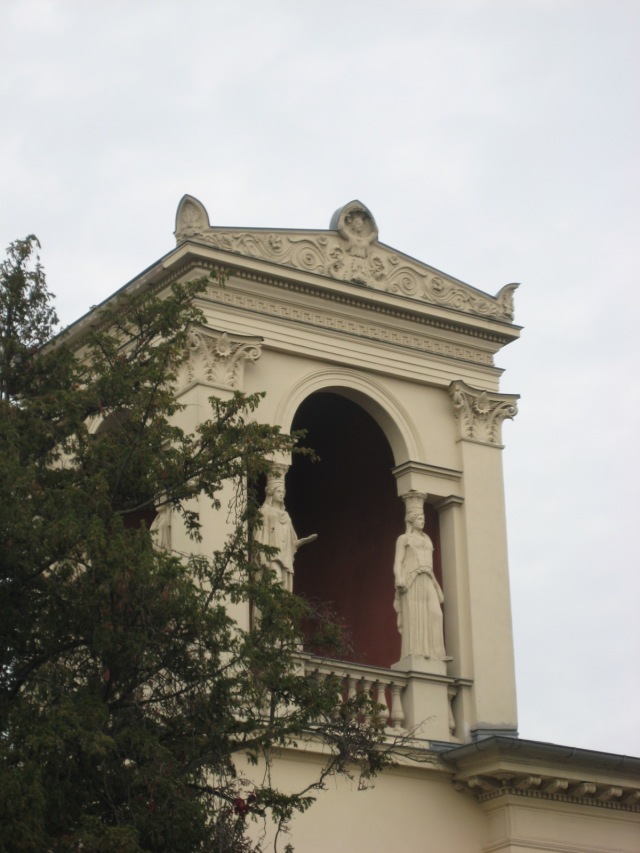 Schloss Babelsberg, as seen from the Glienicker Brücke (Bridge) in Potsdam 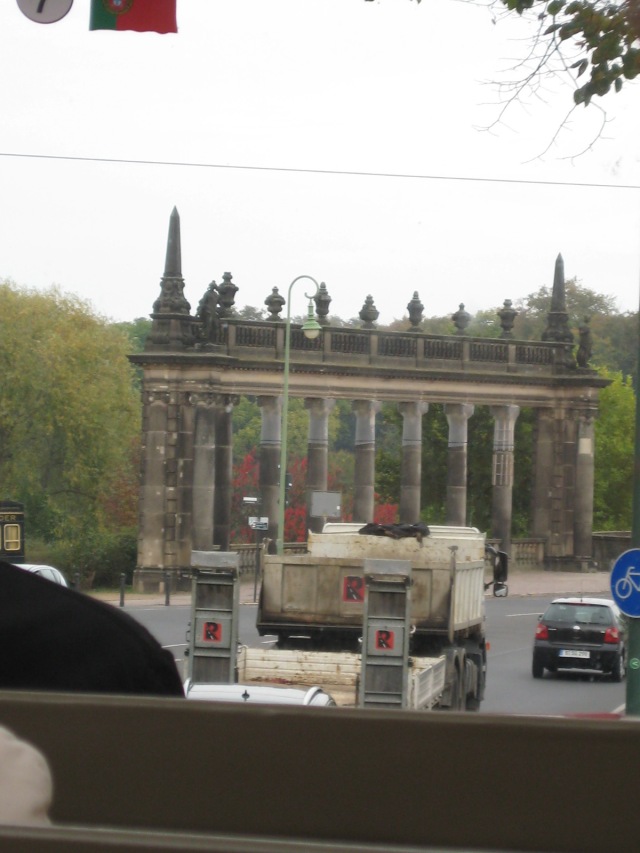 Approaching the Glienicker Brücke, once aka the Bridge of Spies because the Americans and Soviets used it for the exchange of captured spies during the Cold War 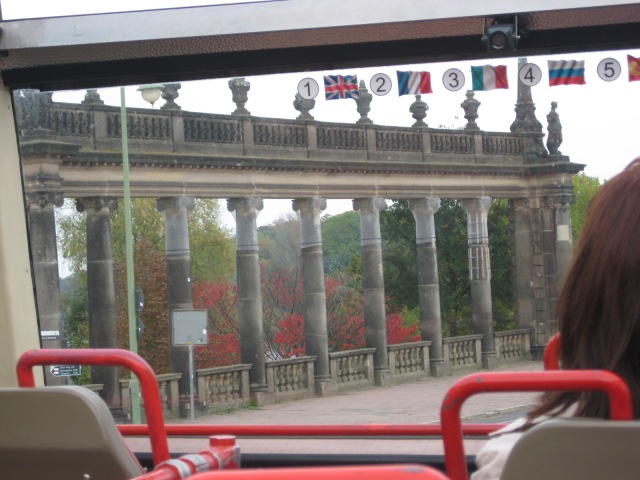 Crossing the Glienicker Brücke, (also called the Bridge of Spies because the Americans and Soviets used it for the exchange of captured spies during the Cold War)

Another glimpse of Scholss Babelsberg from the Glienicker Brücke

Trees and foliage growing out of an abandoned building in Potsdam 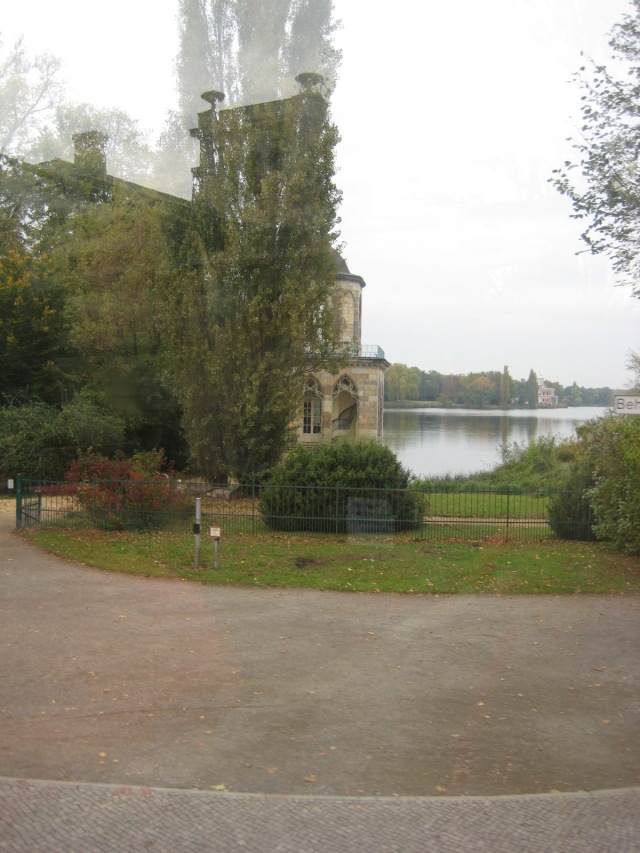 This is the Gothic Library on the shores of the Am Heiligen See (Holy Lake) in Potsdam; built in 1792-1794 by King Friedrich Wilhelm II 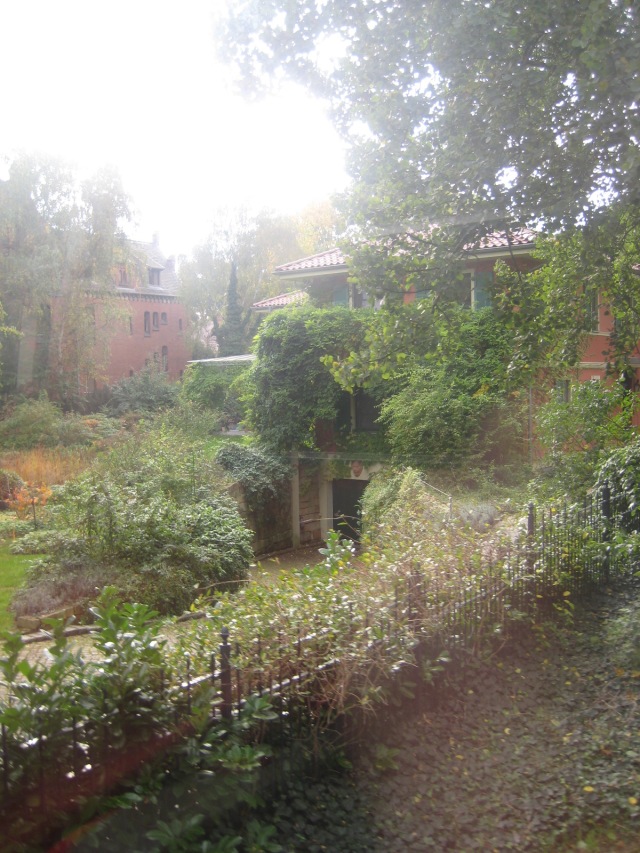 This is the backyard of a house in Potsdam…the entire yard was covered in beautiful trees and flowers.

A view of the front of Sanssouci

I think this is part of the Orangery gardens 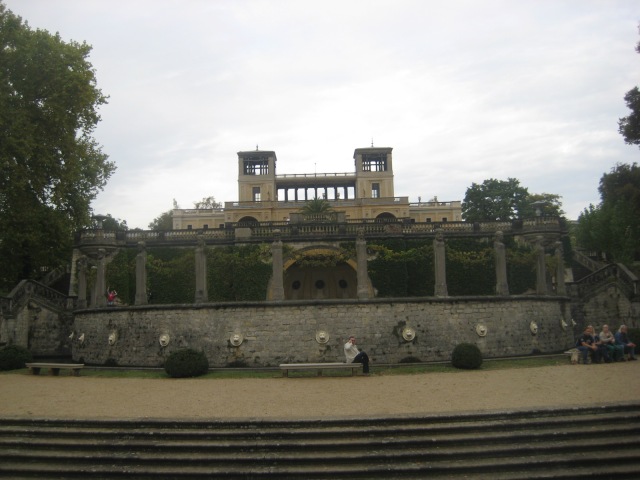 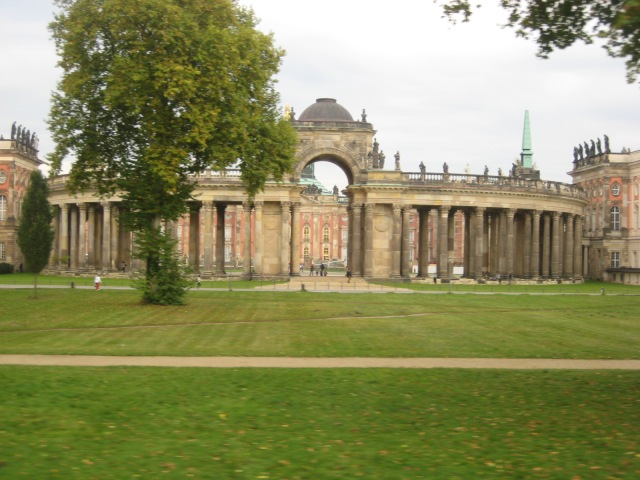 The Historic Mill of Sanssouci in Potsdam

Not sure what this yellow building is, behind the Historic Mill of Sanssouci in Potsdam 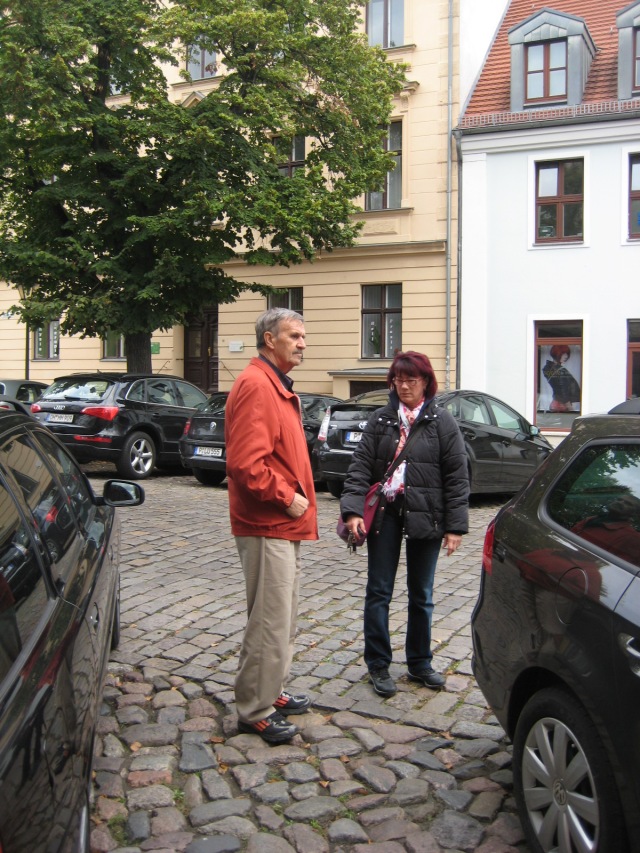 André and Kerstin in Potsdam 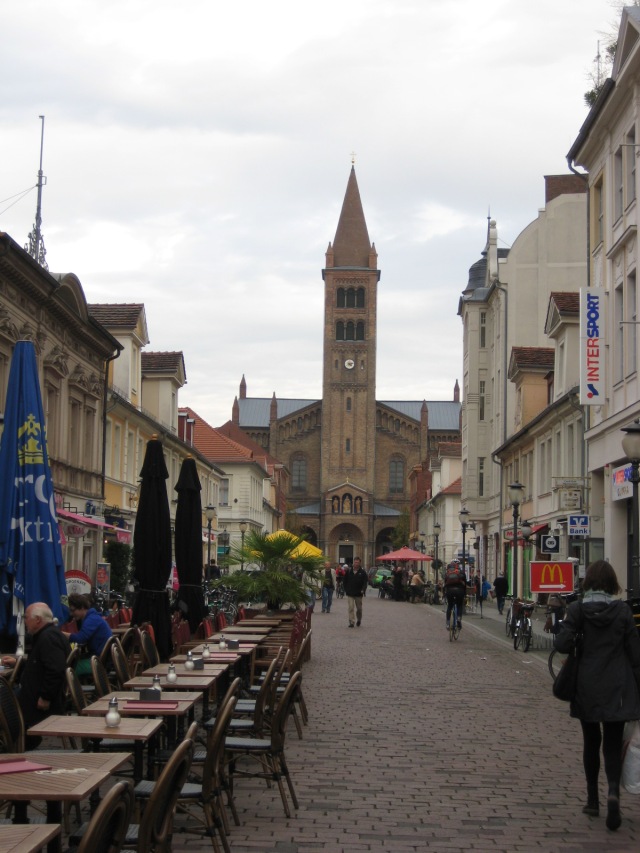 Kerstin telling André he has to go and pick out his pastry at the front of the cafe. We’re all going to pick different ones and then share.

This was my choice…chocolate pecan cake (richer and denser than pie). Decadent and delicious!

Some of the other choices…Janine chose cheesecake, and André chose a German specialty (I don’t know the name).

These red brick buildings are typical for this Dutch sector of Potsdam.

The Church of St Peter and Paul was the first Catholic church in Potsdam; it was built between 1867 and 1870 with Byzantine and Roman influence.

The interior of the church of St. Peter and Paul in Potsdam 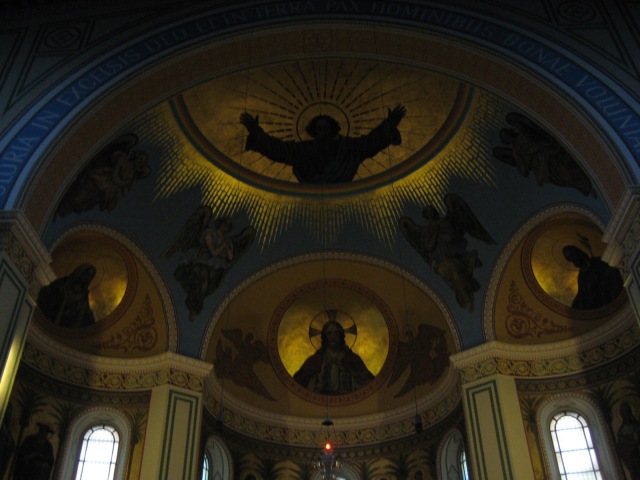 Beautiful paintings in the Church of St. Peter and Paul…

A glimpse of the neo-gothic Nauener Tor (Nauen Gate), one of the three remaining city gates of Potsdam, built in 1754/55. 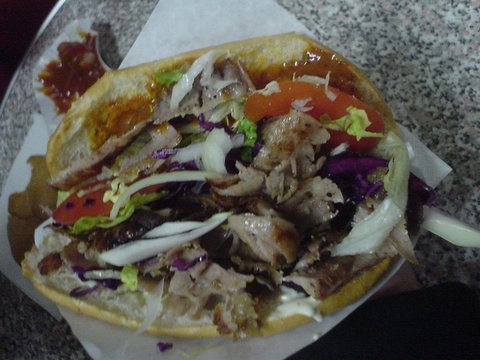 I didn’t take this picture (see link above), but it looks just like the donairs we enjoyed in Nauen. 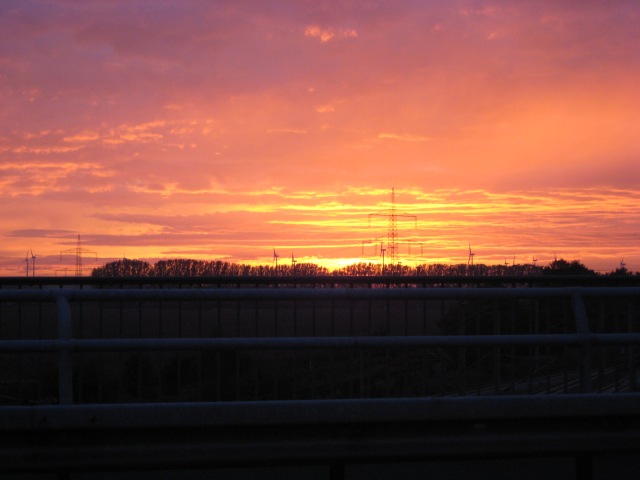 The whole sky was on fire! 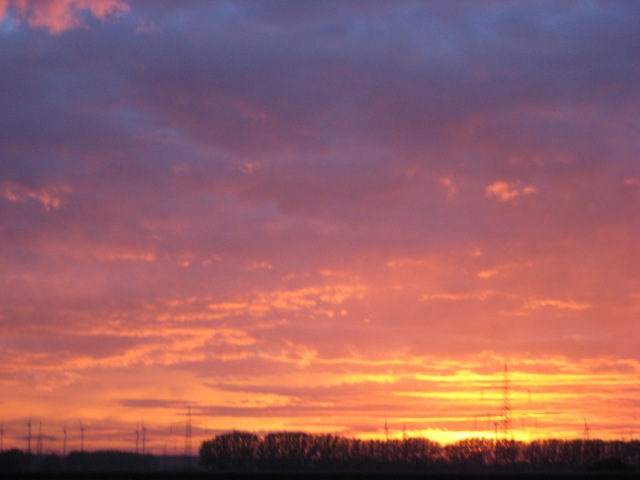 This gorgeous sunset played across the sky for about 15-20 minutes.

I love to write. I love to write myself into being right here right now. Writing releases something in me that needs wings, writing opens doors and windows that I often don't even realize are possible, writing helps me breathe out the dusty old, and to breathe in the new and possible. My hope is that maybe writing here in this blog will bring new light into these dusty old hallways and help me to clear out the thinking processes and mindsets that just don't work for me anymore. I seek to breathe new light and life into the nooks and crannies of a soul that has been feeling somewhat lost and frayed because of the last few patches of road I've had to travel.
View all posts by Sharon →
This entry was posted in Germany, Potsdam, Travel and tagged Berlin, Germany, Potsdam, travel. Bookmark the permalink.