Up until my visit to China, I had only had two experiences of Shanghai…one from Burl Ives’s song, “Shanghaied” (there’s a handy link at the bottom of this page if you want to listen) which I’d been listening to since I was a child, and the other was from watching Shirley Temple’s movie “Stowaway”, where her character Chin-Ching got lost in old Shanghai. Combined with snippets of stories in the news over the years, my preconceptions of the city were of a very busy merchant seaport where people got lost, drugged, kidnapped and shanghaied.

This was the view out of our 15th floor hotel window in Shanghai.

The reality turned out to be a much larger city than it had appeared to be in Chin-Ching’s escapades. Shanghai is a bustling, crowded seaport of over 23 million people. Our cruise around the harbour allowed us a panoramic view of the eclectic skyline of skyscrapers so tall that they almost seemed to rise above the clouds. 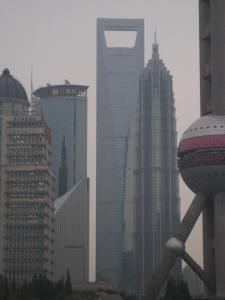 The one building that seemed to be the magnet for most photographs that day was the Shanghai World Financial Center, or as we all called it, The Bottle Opener. The story that we were told by our local guide is that the building was originally designed to have a round opening at the top, which was supposed to hold a Ferris wheel. As we gasped at the thought of a Ferris wheel at the top of this 101-story building (pretty windy for a Ferris wheel up there!), she told us that the government put a stop to this particular design – not because of liability fears, as we all were thinking, but because the combination of the circle opening and proposed-red-lit Ferris wheel would have made it look too much like the Japanese flag. So the design was changed to its present-day trapezoid opening, making it one of the most distinctive buildings on the impressive Shanghai skyline.

You can read more if you want about the architecture and history of Shanghai here and the Bottle Opener building here.

For me, my favourite part of Shanghai turned out to be one of our favourite shopping experiences of the entire trip. Unfortunately, the tour ended up splitting the afternoon between two popular shopping districts, and most of us would have preferred to stay in the first area longer and skip the second one entirely, but we didn’t know that at the time. 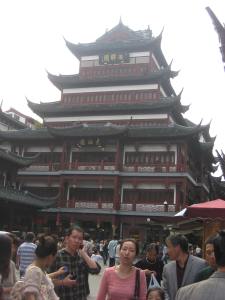 The first shopping area we went to was the old walled city’s Chenghuang Miao in Shanghai’s City God Temple district, where ancient Qing (A.D.1616-1911) Dynasty architecture housed  over 100 kiosks and souvenir shops selling everything we all wanted to buy. Two hours simply wasn’t enough! We could have shopped til we dropped, given the choice.

One of the experiences that I particularly enjoyed here was finally coming into my own with the bartering, realizing with surprise that it was as much a game for the vendors as it was for us. The young woman who finally gave me my red silk shopping bag for my asking (“walk-away”) price seemed to take great delight in me sticking to my price, laughing and hugging me when it was all done. Maybe it was because she had still made more than the bag was worth, but it was still an “aha” moment that led me into a lot more bartering fun and laughter with various local vendors for the rest of our trip.

The second shopping expedition was to Nanjing Road, a high-end, very crowded, very famous “Park Lane” style pedestrian shopping street. Only the most expensive, high-end brand-name stores here. Way out of our budget…even two Hagan Daz ice cream cones put a huge dent in our wallets here. After the fun bantering and unique character-feeling of the Chenghuang Miao Market, many of us were quickly longing to go back there for the rest of our allotted shopping time. Still, it was an experience, and the ice cream WAS good! 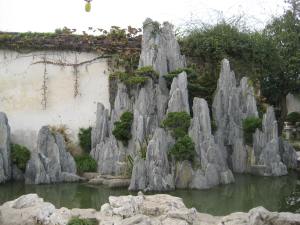 One of my favourite displays at the Liu Garden, in Suzhou (near Shanghai)

Over the three days that we stayed in the Shanghai area, our visits also included the Silk Factory in Suzhou, the beautiful Liu Gardens in Suzhou, the Shanghai Museum (I especially loved viewing the ancient furniture there), a cashmere factory (which made some of us sneeze a lot) and an amazing Acrobatic Show where the grand finale was the stuffing of seven (7) roaring motorbikes in a large (but not THAT large) ball. We weren’t allowed to use our cameras during the show, but I did manage to smuggle out one picture of the ball.

So Shanghai turned out to be a fun and much more interesting part of the tour than I had anticipated. Now my Burl Ives song has even more nostalgic meaning than ever… 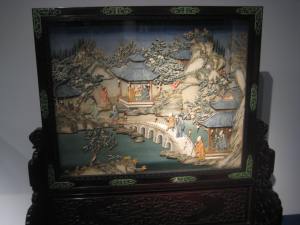 At the Shanghai museum, an example of Qing style screen: screens were used in ancient China to shut out daylight, to separate rooms and to provide shelter from the wind.

Beautiful red screen and chair at the Shanghai Museum

This is the duvet cover we bought at the Silk Factory in Suzhou, near Shanghai. (It’s a good thing we decided to buy the King-size, because it’s still slightly too small for our queen-size duvet!)

I was only able to smuggle out this one picture from the amazing Acrobatics show in Shanghai. They eventually stuffed seven motorbikes (with drivers) in this ball, all zooming around inside the ball together. A chair-gripping spectacle!!

I love to write. I love to write myself into being right here right now. Writing releases something in me that needs wings, writing opens doors and windows that I often don't even realize are possible, writing helps me breathe out the dusty old, and to breathe in the new and possible. My hope is that maybe writing here in this blog will bring new light into these dusty old hallways and help me to clear out the thinking processes and mindsets that just don't work for me anymore. I seek to breathe new light and life into the nooks and crannies of a soul that has been feeling somewhat lost and frayed because of the last few patches of road I've had to travel.
View all posts by Sharon →
This entry was posted in China, Travel. Bookmark the permalink.

5 Responses to Trekking Through China…Shanghai